$25 Million Gross Recovery for Clients in 2019We treat our clients like family.
contact us now
For a Free Consultation 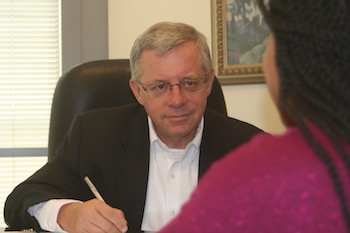 Catastrophic truck crash cases are the core of our law practice. Mr. Shigley is a member of the Board of Regents of the Academy of Truck Accident Attorneys, the premiere national organization of lawyers focused exclusively on representation of injury victims in truck crash cases. Previously, he served as a board member of the American Association for Justice Trucking Litigation Group and chair of the Southeastern Motor Carrier Litigation Institute.

Mr. Shigley is the 2019 plaintiffs' practice recipient of the Tradition of Excellence Award from the General Practice & Trial Section of the State Bar of Georgia. In 2011-12, Mr. Shigley was president of the 45,000-member State Bar of Georgia, which includes all attorneys and judges licensed in Georgia. That included intense work with the executive, legislative and judicial branches of state government and judges' councils in all classes and levels of the judiciary statewide, the 150-member board of governors, 16-member executive committee and staff of 75 in three State Bar offices in Atlanta, Savannah and Tifton. He also served as a member of the Special Council on Criminal Justice Reform (appointed by Governor Nathan Deal),chairman of the board of the Institute for Continuing Legal Education in Georgia (2012-13, trustee 2008-present); and as a member of the Commission on Continuing Lawyer Competency, the Chief Justice's Commission on Professionalism, Georgia Commission on Dispute Resolution, Georgia Courts Automation Commission, as a member of the American Bar Association House of Delegates, National Conference of Bar Presidents and Southern Conference of Bar Presidents. Previously, he was chair of the State Bar of Georgia Tort & Insurance Practice Section and the Georgia Insurance Law Institute.

In 2012, the Georgia Judicial Nominating Commission included him in the "short list" of nominees submitted to the Governor to consider for appointment to the Georgia Court of Appeals. He ran statewide for election to the Court of Appeals in 2018. Although he got more votes on the day of the primary election than the eventual Governor, Brian Kemp, he came in second in the judicial election.

Mr. Shigley is the lead author of Georgia Law of Torts: Trial Preparation & Practice (Thomson Reuters West, 2010-19), which was quoted as an authority by the Supreme Court of Georgia and federal district courts.

Peer review ratings include an “AV” (highest) rating in theMartindale Hubbell Law Directory, “Super Lawyer” rating in Atlanta Magazine, “Legal Elite” ranking in Georgia Trend magazine, “Who’s Who in Law” listing in Atlanta Business Chronicle, and inclusion in the Bar Register or Preeminent Lawyers. For over 25 years, he has been a frequent speaker at continuing legal education programs in Georgia and across the United States.

Representative Cases: All cases are different, and past performance does not guarantee future results, but here are a few representative cases.

After graduating from Emory Law School, Mr. Shigley began his career as an Assistant District Attorney in the Tallapoosa Judicial Circuit, prosecuting hundreds of criminal cases in the counties of Douglas, Haralson, Paulding and Polk. He then spent several years in small town general practice, handling a broad range of matters that included criminal defense, divorce, child custody and support, real estate, wills, probate, bankruptcy, small business formation, collections, personal injury, workers compensation, and virtually anything else that could come in the front door of a small town law office.

He launched his own firm in Atlanta at the end of 1990, and since then has focused primarily on plaintiffs’ personal injury and wrongful death cases and insurance coverage disputes.

From 1995 to 2003, he served frequently as a mediator at Henning Mediation & Arbitration Service.  Currently he is a mediator with Miles Mediation.

A graduate of Furman University and Emory University Law School (where he has been an adjunct instructor in trial techniques and small firm practice), he also completed the "Ultimate Trial Advocacy" course at Harvard Law School, an executive education program at Harvard Kennedy School of Government, and all four  regional programs of the Gerry Spence Trial Lawyers College.

Mr. Shigley is currently an active elder of Peachtree Presbyterian Church in Atlanta.  He has served as trustee of The Peachtree Trust. He has served as an elder at Peachtree Presbyterian Church, YMCA youth soccer coach, assistant scoutmaster of the Boy Scout troop where his son became an Eagle Scout, board chair of a church-based child development center, Secretary of the Bill Maness Good Samaritan Scholarship Fund, Inc.,board member of Lifegate Christian counseling center, and on the national advisory board of the Children's Tumor Foundation Endurance Team.

Ken was married almost 34 years until his wife, Sally, succumbed to a 29-year battle with recurring brain tumors in June 2017. Their two adult children are both married and on their own. In his spare time, he has completed marathons and triathlons, and enjoys backpacking, scuba diving, kayaking, biking and travel.

Contact Us
Practice Areas
Client Reviews
★★★★★
"My family hired Ken after our parents were killed in a trucking accident in GA in 2013. We worked with Ken for 19 months before our case settled. During this time I thought Ken was outstanding. He was accessible to us at all times and maintained consistent communication. He was patient with us and took time to explain the finer points of law. While we avoided going to trial, he prepared diligently and I felt like he was leaving nothing to chance. I am relieved that our case is complete and I will miss working with Ken. He was very thoughtful and caring while helping us to stay relaxed. I would highly recommend him to anyone who requires these types of services." David U., Client, Vermont
★★★★★
"When tragedy struck our family in the form of the wrongful death of our son and caused me physical injuries and changed our lives forever, we dragged our feet about hiring a lawyer. I didn't want to face having to go through the stress. Big mistake. The first thing you do is hire local counsel. I found Mr. Shigley by surfing the web, and we got a listening ear. He was realistic, professional and worked very hard in our behalf. Not only that, he showed a genuine concern for our family, and ran interference for us on a number of issues relative to our case. If I had it to do over again, I would have hired him sooner." Carolyn R., Newnan, GA
★★★★★
"After my parents were killed in a tractor truck accident on December 2013, he fought hard against the insurance companies to help my brother, sister, and I. He was honest and always available to answer any questions I had. Ken went out of his way to meet with my brother and I while on vacation in New England. He was awesome in explaining everything to us in detail and looked out for us with every step of the lawsuit. I would highly recommend him." Joan M., Client, Massachusetts
★★★★★
"I first met Ken when I watched him try a very difficult case involving catastrophic injuries. He was an incredibly effective advocate and was able to obtain justice for his client. I have since come to know him as one of the state's leading trial lawyers, particularly in trucking cases, which involves complex regulatory and legal issues not involved in other types of cases. I do not hesitate to recommend Ken for any kind of personal injury case." John H., Attorney, Atlanta
★★★★★
"Ken Shigley is an excellent trial lawyer in the area of commercial trucking. He knows the specialized rules for handling truck wreck cases for the victims and their families when tractor-trailers leave a devastating loss, catastrophic injuries and deaths. He is an advocate who understands the impact on his clients and is highly effective in bringing them justice." Myles E., Attorney, Atlanta
View More
Submit a Law Firm Client Review